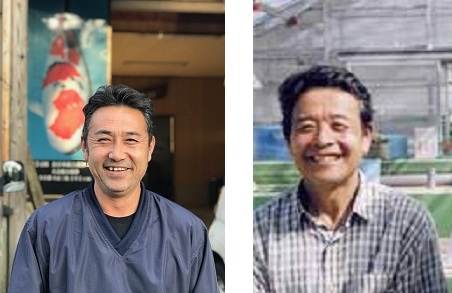 Nestled on the mountain slopes of the legendary Yamakoshi Village, Yamamatsu Koi Farm is famous across Japan for their Matsunosuke Sanke.

In the 1960s, Mr. Toshiyuki Sakai and his brother Toshio had been trying to breed beautiful large Koi with a dignified appearence. They had some success, but the Sankes they were managing to produce never got very large.

Not giving up on their dream, the brothers tried over and over, utsilising many different parent fish and techniques, until at last in 1974 they struck gold.

This was the beginning of the famous Matsunosuke Bloodline, which continues to constantly be improved to this day.

The Matsunosuke Sanke named “Himiko” won Grand Champion at the All Japan Combined Nishikigoi Show in 1994, and another of their Sanke won again in 1995. This is the first time in the show’s history that a Sanke had won Grand Champion in two consecutive years.

Since then, they have claimed even more prestigeous prizes and are well known across Japan for being top quality fish.

These days, the Yamamatsu Koi Farm has been handed over to Toshiyuki’s son, Mr. Toshiaki Sakai, who continues his father’s work in breeding beautiful Matsunosuke Sankes.

They specialise in; Matsunosuke Sanke and Kohaku, with a small number of other varieties.